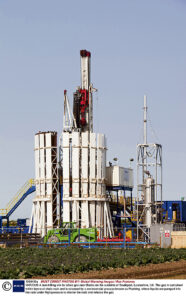 Mandatory Credit: Photo by Global Warming Images / Rex Features (1994419a)
A test drilling site for shale gas near Banks on the outskirts of Southport, Lancashire, UK. The gas is contained within layers of shale rock and is released by a controversial process known as Fracking, where liquids are pumped into the rock under high pressure to shatter the rock and release the gas.
VARIOUS